“I would feel good knowing that I could help stop others from being abused, exploited, or forced to do anything against their will because I really don’t want other people to face the same situation as me.” – Survivor

Conventional justice systems focus primarily on punishing offenders. Our research suggests that survivors of trafficking desire other outcomes instead. Alternative justice delivery models could help place survivor’s interests at the heart of the justice system.

In the last two decades, there has been a rising trend of Southeast Asian countries introducing stringent penalties to combat trafficking. However, despite these advances, Southeast Asia remains a global center for human trafficking. Estimates suggest that two-thirds of human trafficking victims globally – or 25 million people – are from the East Asia and Pacific region. Victim detection rates in the region are approximately half the global average rate, and the gap between identified victims and convicted traffickers is widening.

This primary focus on retribution has not reduced criminality, and also diverted attention away from survivors’ needs and perceptions of justice. For example, while at least 10 countries in Southeast Asia have strict sentencing measures in place for convicted traffickers, most lack a national referral mechanism to refer victims to social services.

“I had to ask my family for money for my visa, for transportation, and food. They sold the farm to send me money. When I found out I can get compensation, I decided I want to fight for my rights.” – Survivor

A new study led by Dalberg for Porticus Asia examines justice systems for human trafficking in six jurisdictions in Southeast Asia – Cambodia, Hong Kong, Myanmar, Philippines, Thailand and Vietnam. It sheds light on the potential of survivor-centric approaches to justice, which are at a nascent stage in the region. The report provides funders, implementing organizations and researchers with a roadmap as they explore alternative ways to improve justice delivery. While these regions have made some strides in delivering the justice outcomes identified by survivors, there is opportunity to do considerably more.

By interviewing survivors in these jurisdictions and the NGOs working directly with them, the Dalberg team identified three key outcomes that matter most to survivors:

Additionally, even those that go through the justice system cannot easily access these outcomes, either because countries lack provisions or have inconsistent delivery mechanisms. For example, there is no standard operating procedure for calculating compensation in Cambodia and rehabilitation services are subpar in Hong Kong. De-linking these benefits from participation in trials and improving their delivery will ensure that a wider group of survivors can access these benefits. 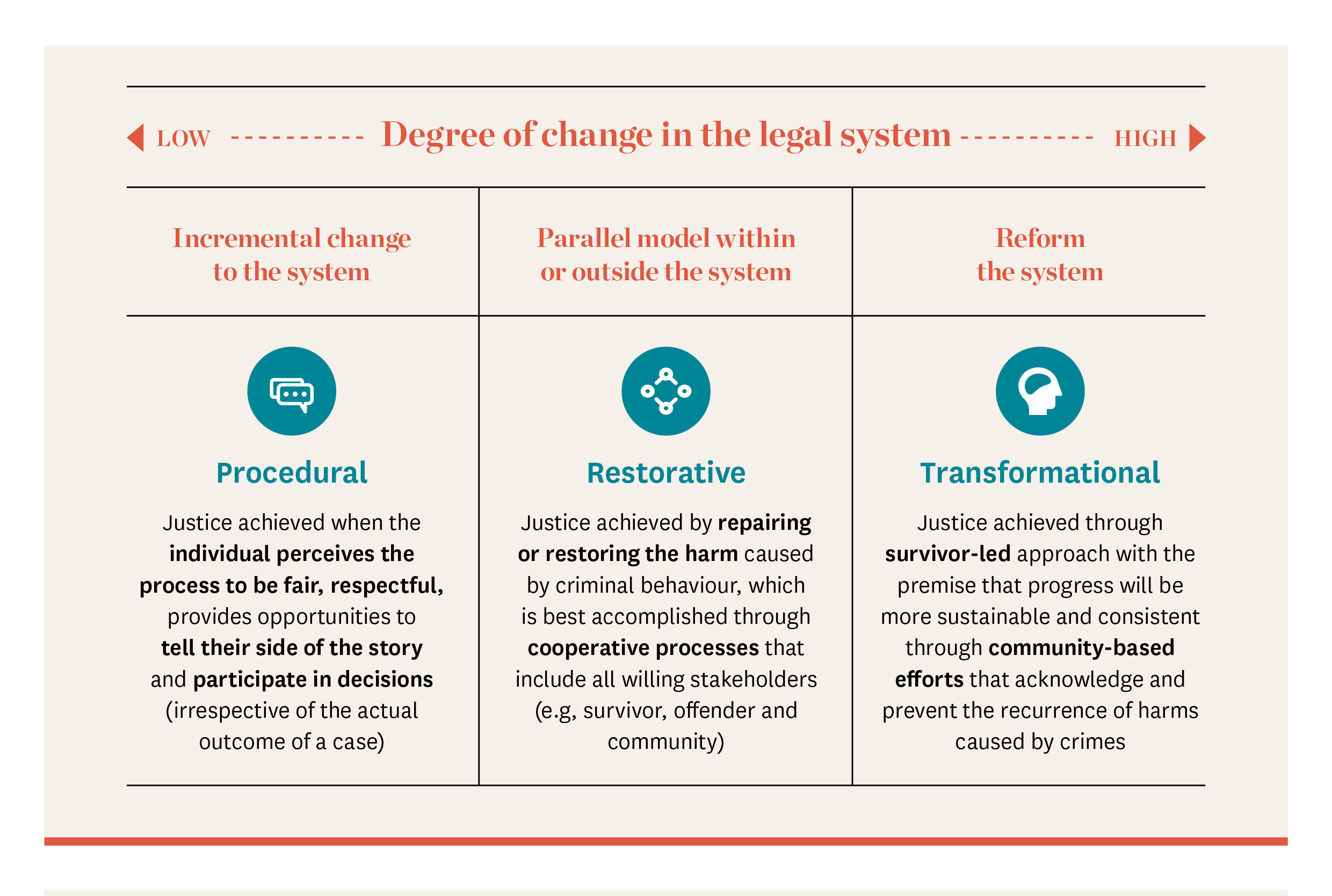 Each of these pathways has been applied in trafficking to different degrees. Procedural justice interventions are already widely used in trafficking, with examples of trauma-informed sensitivity training for law enforcement officials in multiple countries. Restorative justice interventions have been applied in serious crimes like intimate partner violence, sexual assaults and hate crimes, but their applicability in human trafficking specifically has not been tested widely yet, and is limited to mechanisms leading to reparations (instead of apologies). Transformational justice has seen some traction in trafficking through survivor-advocacy groups.

Alternative justice applies differently across survivor profiles, depending on the nature of trafficking (sex vs labor trafficking), trafficking experience (degree of coercion involved), age and nationality, among other factors. For instance, procedural justice interventions are particularly valuable in cases where survivors are deeply traumatized after experiencing high degrees of violence, but are still forced to undergo a trial because of country-specific laws or because they are keen to see the offender punished.

By mapping the three outcomes that survivors care most about against the three different justice pathways, we identified nine potential interventions to improve the delivery of justice for survivors. Four of the nine interventions appear particularly promising for immediate support with clear immediate need and the existence of scalable models already in the region – these are:

Other interventions can potentially be successfully implemented after tweaking their models or testing their applicability to trafficking in the region.

Traditionally, alternative justice models have been regarded with skepticism in the trafficking space because their applicability to serious crimes like trafficking have not been adequately established.

The solution lies in seeing these models not as alternatives to the existing legal system but as parallel interventions, designed to help survivors access outcomes that they regard as meaningful. Funders, implementing organizations, researchers and survivors all have a role to play in furthering our understanding of this space and exploring its potential.

The study provides details of the research and recommendations and can be downloaded here.