Wider use of online dispute resolution (ODR) in India could unlock US$26.5 billion in economic benefits annually, save time, and improve well-being, enabling positive outcomes for individuals (including the marginalized), enterprises, and the broader ecosystem.

These are a few of the findings in a study by Dalberg in collaboration with Agami, Omidyar Network, NITI Aayog, ICICI, Trilegal, Ashoka, Dvara Research, NIPFP, and Cracker & Rush, that sets out to determine whether widespread adoption of ODR in India could help to improve access to efficient, cost-effective, and fair dispute resolution.

Before the pandemic, dispute resolution in India was already extremely time-consuming and costly. A typical case could take as long as 4-5 years to resolve. As Covid-19-induced delays and closures further expand arrears, litigants’ waits threaten to stretch to a decade or longer.

The need for alternate dispute resolution solutions has never been more pressing. Addressing the problem will take a three-fold approach. First, outcomes must be improved so that existing cases in the system are adjudicated efficiently. Second, alternative mechanisms must be developed to ensure that cases which can be resolved amicably are diverted to alternative forums, reducing the burden on existing formal court resources. And finally, additional services must be developed and deployed to ensure access to those who are left behind by existing dispute resolution options. 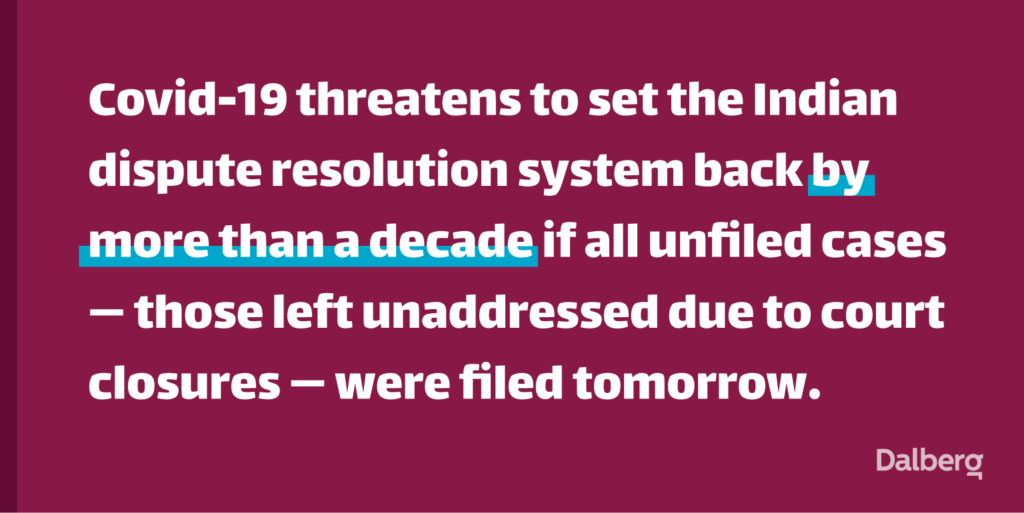 In the words of Justice DY Chandrachud, “Above all, there needs to be a fundamental mindset change — to look upon dispute resolution not as relatable to a place, namely a court, where justice is “administered,” but as a service that is availed of.”

Disputes are time consuming, costly and complex
Resolving a dispute in India remains too time consuming, expensive, and complex for litigants. This translates into profound economic impacts for those relying on formal justice mechanisms. Economic costs are amplified when cases that do not even make it to court are considered in addition to the broader intangible impacts on trust, entrepreneurship, and innovation.

India is not alone. The complex nature of judicial systems, their multiple forums and intricate procedures, as well as widespread unfamiliarity with the process, have resulted in somewhere between 75%-97% of citizens globally not seeking legal assistance to resolve their justiciable problems. In India, a large proportion of cases are also withdrawn due to delays, cost, or threats of violence.

Where ODR can fill the gap
The use of technology simplifies and expedites the process, and reduces costs significantly. And where litigants typically resolve disputes in 45-90 days using ODR, resolution in the formal legal system can take up to 1,825 days.

ODR uses technology to facilitate the resolution of disputes between parties, primarily through negotiation, mediation, conciliation and arbitration, or a combination of all four. It falls beneath the umbrella of ADR – alternative dispute resolution – which describes any method of resolution that does not take place in civil courts. 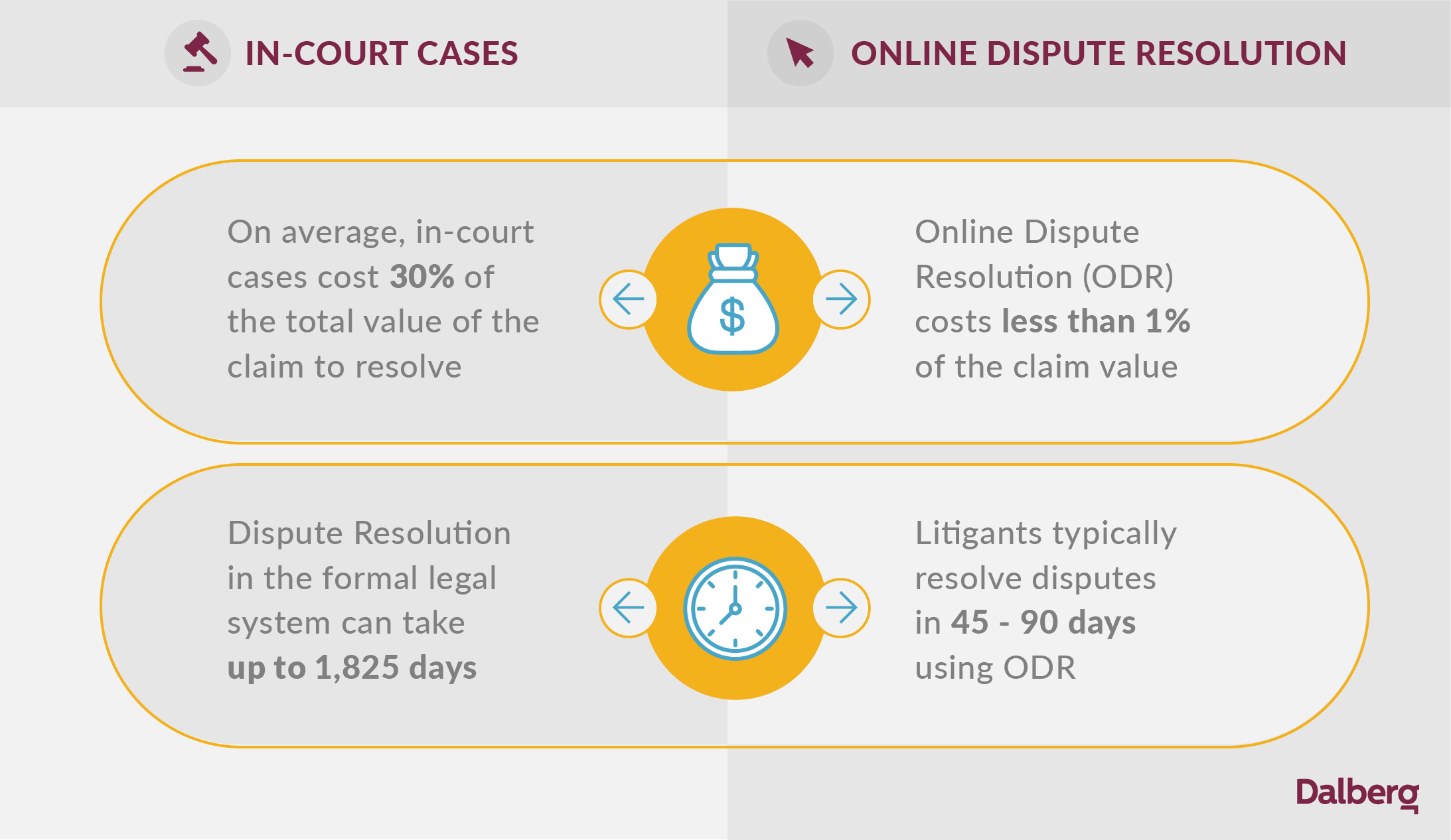 Although it relies on technology to facilitate resolution, ODR is not a solution for only the tech-savvy: it offers potential for integration with existing intermediaries and services to expand access to justice to underserved segments. Citizens and organizations can access ODR by leveraging existing professionals and public services. The growing need for ODR services unlocks new opportunities for existing dispute resolution professionals (e.g., private lawyers, legal aid nonprofits) as well as domain experts in specific subject matter areas (e.g., insurance). These professionals can leverage opportunities to train as certified ODR professionals to expand services and acquire new clients.

The widespread shift to ODR in some countries has met with positive results, suggesting its potential for extensive adoption in India. Disputes in the EU have been resolved 97% faster through ODR than the formal legal system, with 70% of EU consumers satisfied with how consumer complaints were resolved through ODR, compared to 45% of consumers satisfied with court resolution. In the US, the Michigan Health System found a 67% reduction in time to solve a case due to ADR mechanisms, and a 50% reduction in cost, and also realized that most of the time, all that patients needed was clarity, which also reduced the number of cases they faced.

The immediate opportunity for a simpler process
Following Dalberg’s analysis of 100 sectors in India, seven sectors have been identified as showing high potential for immediate ODR implementation, namely: banking, e-commerce, travel, rental, health, utilities and government services. In the study, these sectors are explored across different issues and user segments to illustrate how ODR could be applied.

India’s ODR ecosystem has expanded significantly since 2018 and a number of promising examples are beginning to emerge in the Indian landscape with most Indian ODR providers currently acting as third-party dispute aggregators.

In the experience of a housing startup providing rental housing solutions for professionals in major metropolitan cities across India, “Because we have a lot of low value renter defaults, we struggled to recover effectively through courts or an arbitral process. ODR has helped to bring down both the cost and time involved in resolving payment disputes.” Until now, India’s rental housing sector has experienced low growth due to the high probability of dispute occurrence and the ineffective litigation process deterring consumers.

In another example, a hybrid ODR model is being used to help informal workers who are currently under-served by the legal system and don’t have the information or capacity to enter the system on their own.

A solution with huge potential – that will require steering and coordination
The study culminates with several scenarios and precautions around ODR adoption and offers recommendations on how the ODR ecosystem can be catalysed, as well as the roles that different stakeholders can play in ensuring it is effectively adopted and implemented.

Although ODR’s potential is evident, there remain important challenges which must be proactively addressed to ensure that litigants and adjudicators adopt ODR. The most prominent issue revolves around trust: although ODR awards are enforceable under existing Indian law, many potential adoptees remain wary of the enforceability of awards granted through a relatively-new dispute resolution mechanism. A secondary gap exists around knowledge, with most litigants lacking awareness of ODR as a potential, cost-effective alternative to traditional dispute resolution methods.

In order for ODR systems to operate at scale, government policymakers, ODR service providers, and broader ecosystem stakeholders will each need to play distinct roles in addressing these barriers. For policymakers, taking steps to proactively address concerns around award enforceability will be a key central step in building out a broader, comprehensive policy framework for ODR.

ODR shows huge potential to help avert the crisis that Covid-19 could bring to an overburdened judicial system, but it is in its nascent stage. As adoption increases, and as ODR service models begin to mature, with proper policy planning, investment, and stakeholder support, ODR could become a powerful tool for expanding access to justice for all Indians.