Around 85 million people in Latin America and the Caribbean (LAC) still cook with wood, charcoal and other solid fuels. These traditional cooking techniques have dire effects on users’ health, environment and productivity.

Traditional cookstoves are causing a quiet epidemic among the global poor. Household air pollution from cookstoves is the fourth-leading risk factor for disease globally, killing more people than malaria and tuberculosis. This epidemic falls heavily on women and children, traditionally those bound to household work and exposed to cookstove smoke day-in and day-out. Poor women also shoulder the literal burden of gathering wood fuel for cookstoves, devoting on average 1.3 hours a day to the task. Residential fuel burning is also a noted contributor to climate change, taking responsibility for 25 percent of global black carbon emissions, about 84 percent of which is from households in developing countries.

Haiti, Guatemala and Nicaragua have the highest solid fuel usage in the Latin American region with 93 percent, 64 percent and 54 percent of their respective populations still relying on them. Even though LAC has made progress – only 3 percent of people who use solid fuels to cook are in LAC – more needs to be done. 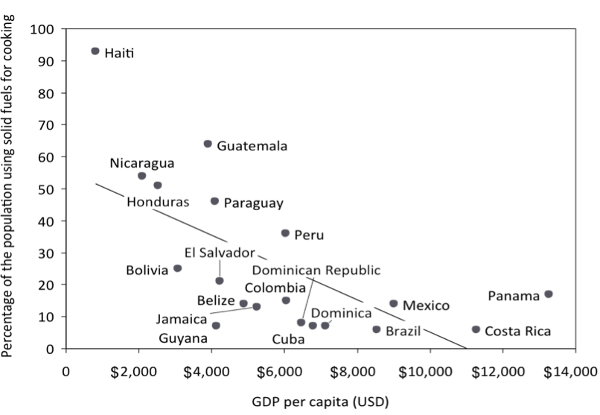 Why do people continue to use these harmful cooking methods? In short, because better cookstoves are priced out of reach.

There is a high correlation between solid fuel use and low levels of income. Solid fuels like wood or animal feces can be readily found in nature, making them cheap to free. In order for clean cookstoves to replace solid fuels, their prices must be calibrated for the poor. Local market development or technological advancements can help lower prices; however, reducing taxes and tariffs for improved cookstoves is an easier and faster first step.

Trade ministers have the power to turn the tide of this health epidemic by lowering trade barriers to clean and improved cookstoves. These cookstoves reduce or even eliminate the health and environmental damage wreaked by cooking indoors. Even a moderately improved cookstove is 20-30 percent more efficient and can eliminate up to 60 percent of emissions. Trade barriers are typically imposed as duties on imports (most improved cookstoves are built outside Latin America) and value-added taxes on sales to consumers. Despite urgent medical and environmental need, these duties are often applied at the same level as they are to goods with less social benefit, like tobacco or alcohol.

In Haiti there’s a 15 percent tariff and tax on clean cookstoves. Based on elasticity of demand, we project that if improved cookstoves’ taxes and tariffs were eliminated, their annual sales would increase by 13 percent, from 185,000 to 209,000. This in turn would mitigate costs associated with health and environmental consequences of traditional cooking techniques. For instance, even though eliminating taxes and tariffs on biomass stoves would decrease government revenue by approximately $12,000, the government could save $16,000 in health costs. This path can be replicated in other Latin American countries, particularly where large parts of the population still use solid fuels, like Guatemala, which has a 24.5 percent tax on clean cookstoves, and Nicaragua, which has a 27.5 percent tax.

Other countries around the world are already lowering tariffs and taxes on clean cookstoves to increase their adoption. East African countries have decided as a group to reduce tariffs on clean cooking techniques – a shift that Dalberg worked toward, with cooperation from forward-thinking ministers, clean cookstove makers such as BioLite, and the World Bank.

By adopting similar measures, Haiti can set an example in the region, demonstrating the life-changing impacts that lowering taxes and tariffs on clean cookstoves can have on lives and livelihoods, particularly for women and children.

Cleaning up cooking in urban Kenya with LPG and bio-ethanol
Bio-ethanol has emerged as a scalable cooking solution, with the potential to meet the needs of lower-income Kenyan households. In a Dalberg study, commissioned by the Climate and Development Knowledge Network, we assessed bio-ethanol and LPG across economic, health, and environmental criteria to understand the impact potential of replacing traditional fuels.
Read more »